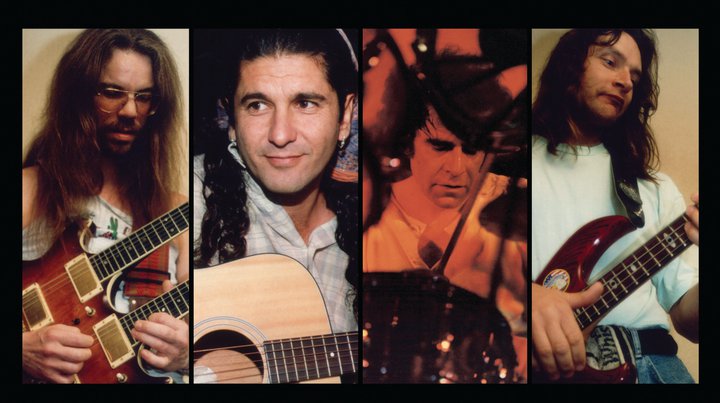 It all started with Odin, who was a 6 piece rock band. They were good. Very good, but after 3 years of gigging around London, they wanted to move forward with an album and bigger audiences. The time just wasn’t right for the music they enjoyed playing. Odin just stopped. Sad indeed!

Colin Tench, Gary Derrick, and Cliff Deighton decided to write and record the kind of music that they most enjoyed, without trying to downgrade it for record companies or anyone else. The music industry, particularly in Britain, was very narrow-minded at that time. Of course, back then, recording an album cost serious money but they got lucky because a guy they’d met named Alex Foulcer was building a new studio and needed workers. He even ended up as a guest on the album, playing the piano.

During the years of 1984-1985, the 3 of them worked at the studio: building, soundproofing, carrying heavy things around. Anything really! That got them studio time. they wrote, built and recorded “Whose Dream” and often could be found there at 3 am, as they were still building the place during the day! Good times indeed. They are kinda proud of the result, which has sat on ice for so many years. They really did work for this album.

They lacked a singer but needed the right one. It took months of auditions and tryouts but luckily, they found Joey. Joey Lugassy arrived in London on his first trip to the UK. He planned to stay a while and advertised that he was looking for a band and the wording of his ad sounded almost too good to be true. They knew he was right for BunChakeze on their first meeting. He felt the same way which was a good thing, as he had to do the impossible, by fitting in with the music that was already recorded.

They had a lot of fun with the whole process. From the hard graft, fitted into the mundane day job lifestyle, the rehearsals and recording process to the final mixing of the music. Magic again!

As the years rolled by, they never tried to revive BunChakeze or the album. What they did do, was go into another studio and remix the album in 1992. They did approach 1 or 2 record companies just for the hell of it. Ha ha.. pointless really! None of this music was ever played by a full band and it deserves to be.

Joey Lugassy went on to gain success with his music. He wrote and sung “Today” for Amnesty International, and earned two Emmy nominations for best song in a drama series. He also wrote and recorded a full rock opera with his band and creation; “Daysix”. He lives in LA to this day.

Cliff Deighton went on to gain a BSc (hons) in antique restoration and conservation. He has worked with the Royal Collection, at the Tate Gallery, the Victoria & Albert Museum, and The Tower of London, and is now lecturing at the London Metropolitan University. This is no ordinary drummer!

Gary Derrick has been the most active in actually playing live in bands. He has been with “Release the Peach” in London for some years now. Colin Tench has spent a lot of time traveling in the intervening years and very little time playing guitar. This has now changed! They are currently in the process of re-organizing themselves. They will recruit a second guitarist and a keyboard player and, with a prevailing wind, will play this music live at last. If you bought the album, you have helped in that process, so a big thanks from them! If you haven’t… tut tut!!