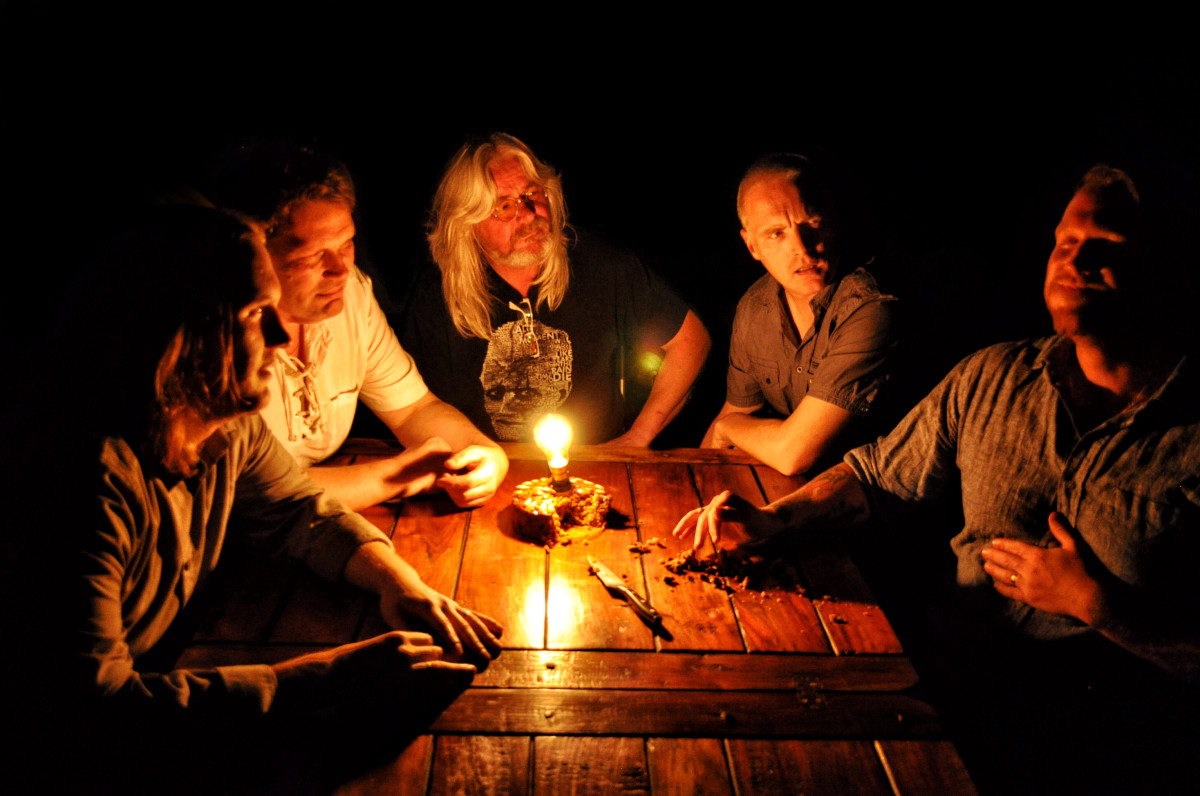 Nth Ascension was conceived of in 2009 and by January 2010 became a reality under the name Nth Degree as a four piece (Darrel Treece-Birch, Craig Walker, Martin Walker and Alan ‘Spud’ Taylor). By 2011 the name had been changed to Nth Ascension and their “live” demo album “Frequencies of Day & Night” was recorded. In 2013 Gavin Walker joined on bass and they began writing and recording their very successful album Ascension of Kings, released in 2014 on Aurovine/Sonic Vista.

Nth Ascension became a member of the MRR Family in February 2016 and released their sophomore album ‘In Fine Initium’ to critical acclaim in November 2016 on Melodic Revolution Records.
2018 sees the band in the practice studio for two live performances in the UK in early and late summer respectively. It’s been a busy year for Nth as they continue writing their new album and will be in the recording studio later this year with the album being released in early 2019 on Melodic Revolution Records.

About Alan “Spud” Taylor
Alan started singing at about eight years old. Like many young musicians, he would sing the chart hits of the time whilst at school and his friends would listen; captivating his friends with renditions of Elvis songs popular in the day.Alan was born into a musical family with both his Mother and Grandmother having sung in the clubs of the time and his Grandfather would play drums. Singing and performance were born to him and in his blood so to speak. He started playing guitar around the time he left school and was initially self-taught sharing his brother’s classical guitar. Many of the first tunes he learned were from his brother who was taking classical guitar lessons.

Shortly thereafter Alan purchased his first guitar, a 12-string Ibanez. He started to write songs and play in folk clubs. Teaming up for a while with the ‘Big Man’ Pete Rodger who was previously one of the ‘The Taverner’s‘ a very popular folk group during the 1970s and who played a Royal performance for Prince Charles.

1981 was a great year, Alan and Martin Walker would meet and start to write and record together using a 4-track recorder. Alan had taken up the bass in addition to singing in these early days. This friendship would evolve into a band named ‘AD’ adding Robert Stirzaker (Counterparts) on drums, Martin Walker (Nth Ascension) on guitars, Andrew Keeling (composer) on keyboards and Alan on vocals. An EP was released in 1984 which was recorded at Park Lane Studios Preesall.

In 1986 Alan met Darrel Treece-Birch (TEN and Nth Ascension) which would begin a thirty-year friendship and music collaboration and the first fruits of their progressive style started to take root in the band ‘Purple on the Storm’. During this time Alan took formal voice training with the professional Tenor Lanceford Roberts.

The 1990s saw various collaborations mainly with Treece-Brich;  ‘Helmwind’, ‘Order of Chaos’ and the ‘Noise Foundation’. In 2002 ‘The Field’ was formed with Martin Walker, Darrel Treece-Birch, Gavin Walker (Nth Ascension), Rob Stirzaker and Alan Allcock; after releasing their first album the band members went off to work on different projects and The Field did not record any further material.

In 2010 Alan was approached by his long-time collaborative partner Darrel Treece-Birch and asked to work on a project that Treece-Birch was involved in with Martin Walker and Craig Walker. This was the beginnings of Nth Ascension which reinvigorated and revitalized Alan’s need for live performance. Initially holding down bass duties and vocals with the band, but welcomed the addition of Gavin Walker on bass in time to record their first album Ascension of Kings in order to focus on his vocal performance.

About Craig Walker
Craig was barely old enough to walk, but his rhythmical ability was already apparent as he would play along to Queen’s ‘We will Rock You’ in perfect time. Throughout his school years, he played drums in school productions and for his local church in Fleetwood.

Craig chose to study music technology in college and played in numerous bands by the time he was 18, most prominent of these was ‘Popstar Heroes’  who were known for playing anything from Metallica to Blink 182. Craig’s style was heavily influenced by the metal genre in his early years. By age 20 he found he needed more of a challenge for his creativity and found his way to progressive rock/metal. Darrel Treece-Birch his father’s long-time friend and collaborative partner introduced him to Dream Theater and a creative spark was re-ignited by the combination of technical prowess and stunning melodies that could be achieved in this genre whilst staying true to his roots in metal.

There are no coincidences in life for in 2009 Craig was asked to help out a local band whose drummer wasn’t available for a concert; this same band also was being helped by Treece-Birch. This led to the two playing together and discovering their undeniable musical chemistry.  After the concert performance, Craig and Darrel decided it was time to start an original project together asking Darrel’s long time collaborators Martin Walker (Craig’s Dad) and Alan ‘Spud’ Taylor to come along to ‘see what happens’. Originally called ‘Nth Degree’, Nth Ascension was born and they went on to produce a demo recording called ‘Frequencies of Day and Night’. Shortly after, Gavin Walker (Craig’s brother) was brought into the band to take over bass duties so Alan could concentrate on his vocal performance.

About Darrel Trece-Birch
Darrel Treece-Birch, is a keyboardist, multi-instrumentalist, composer, producer, and an accomplished mix/mastering engineer.

His first performance was at the Fleetwood Marine Hall in 1975 as a very young 8-year old and he has not stopped performing since.

His professional music career spans more than 30 years and he shows no signs of slowing down, in fact, Melodic Revolution Records expects to be releasing his next solo album later in 2018.

Darrel has released three solo recordings with Melodic Revolution Records, ‘Celestial’ (2015), ‘No More Time’ (2016) and ‘Healing Touch’ (2017). Healing Touch eloquently show-cased Darrel’s musicality including all instruments being played by him; including the production, recording, mix/master engineering of the album, which was all Darrel. To complete this one-man project Darrel created the artwork for this release an original acrylic painting entitled ‘Starting Again’. Creating his own artwork is not new, Celestial album art was also an original painting by Darrel and the No More Time photo cover featured the artistic talents of his son Luke Treece-Birch.

Inspired by the early Electronica music of Oxygene and Equinox by Jean-Michel Jarre and ambient orchestration of Vangelis he bought his first synthesizer (Korg DW6000) at age 17. His inspirations came from Marillion, Yes and Genesis which propelled him into a band at 17, Fleetwood-based ‘Purple On The Storm’ where he would meet his long-time friend and writing partner Alan (Spud) Taylor. The band names changed throughout the years, but the members stayed fairly consistent including guitarist Martin Walker (Nth Ascension).

About Gavin Jon Walker
Gavin is from a musical family, together with brother Craig, grew up surrounded by the music of Martin (Dad) Walker, Darrel Treece-Birch and Alan “Spud” Taylor – some might say they were ‘pickled’ with their music from a very early age. Gavin started out with the guitar but he eventually settled into the bass guitar and spent many formative years learning to play the blues and jamming often with Craig in their living room to the likes of Queen, Metallica, and Nirvana. Having been raised in a musical environment long jam sessions with his brother and father was the natural progression of his exploration as a musician from learning others works to experimenting and creating his own sound and style.

In his college days, Gavin was involved in the band ‘Angel Hill’ which gained some popularity locally, winning the local ‘Battle of the bands’ contest in 2000. In 2002 Gavin joined the group ‘The Field’ as a second keyboard player/percussionist. 11 years later in 2013, Gavin the latecomer to the land of “Nth” joined the band just in time to play his part on the album ‘Ascension of Kings’ and is now currently collaborating on the next Nth Ascension album with the band.

About Martin Walker
Martin discovered his love for the guitar in his early teens after hearing the Dave Edmunds’ track ‘Sabre Dance’. It was Jimi Hendrix playing ‘Voodoo Chile’ that sent Martin on a lifelong quest to discover “awesome noises created by the electric guitar”.

According to Martin; following the usual school and college band-failed attempts of world domination he eventually settled into more realistic projects, namely a band called ‘Inheritance’ which eventually morphed into ‘Thruaglas Darkly’. Thruaglas Darkly went on to release the single ‘Modern Man’ but disbanded before further planned projects could be completed.

During this time Martin would fortuitously meet Alan ‘Spud’ Taylor and together with a few former Thruaglas Darkly members played together as ‘AD’ for a season, it was at this time he was introduced to keyboard player Darrel Treece-Birch.

Once AD satisfactorily concluded Martin withdrew to a few small projects one of which was joining again with Alan and Darrel together with Rob Stirzaker, Alan Allcock and his eldest son Gavin Walker to play as ‘The Field’ who went on to do a few gigs as well as release their self-titled album The Field. It was basically a live recording which captured the energy of the band for whoever desired to listen. This project concluded and Martin continued working on a few solo ideas until asked to join his son Craig, together once again, with friends Darrel and Alan. Initially it was a get together just to play for the fun of it; the music genre we all loved. This quite quickly became more than the ‘knock about’ it was intended to be and with the addition of his other son, Gavin Walker the group evolved into Nth Ascension.