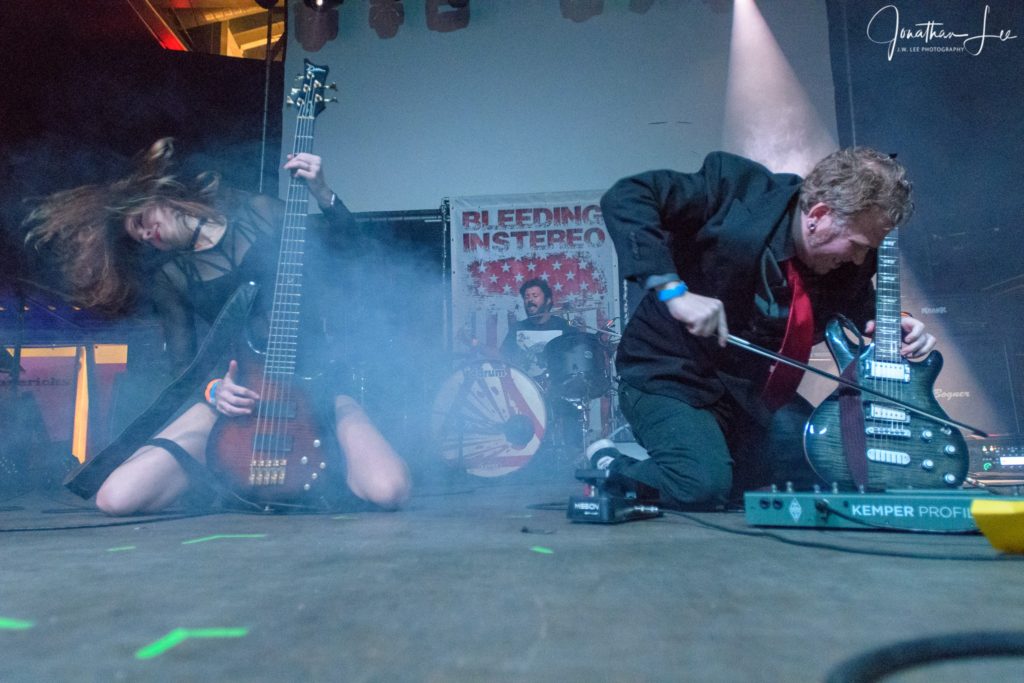 Sunshine & Bullets originally formed in 2010 in Tampa, FL as a power trio with the goal to create a large dynamic sound out of only 3 members, with both male and female vocals. They developed their unusual blend of rock music and started booking shows, building a cult following in various cities across the U.S. and made friends around the world. Rich Keane Jr. earned the nickname “Ginger Loko” for his red hair and wild stage antics such as playing his guitar on the floor like a piano and throwing it up in the air and catching it in time to finish a riff. They recorded and released the album Triangulum Mechanism in 2014. The single “…go” from the album was reviewed by Bubba the Love Sponge on a Nationally Syndicated FM program, and he said, “I find your band one of the most brilliant bands I heard in 28 years of radio.” The music on that album ranges from dark and heavy to peaceful and ambient, with Rich Keane Jr. and Amanda Hamers both singing lead, giving them comparisons to Evanescence, Linkin Park, Chevelle, A Perfect Circle, and others. Shortly after releasing Triangulum Mechanism, they experimented with lineup changes. Amanda Hamers started playing the 7 string guitar, and they added Sam Brown on bass to become a 4-piece. After six months, Brown left the band to pursue other endeavors. They auditioned Chandler Cornell and he was with the band for a year and a half until he also decided to part ways with them. Both Brown and Cornell remain friends with S&B, but the original trio took this as a sign that they need to be a 3-piece, so instead of auditioning for a new bass player, they went back to their roots and Hamers picked up the bass again with renewed passion, and Keane took over the 7-string. Almost immediately, the band started writing and recording new material. The music on The Centauri Conspiracies: Part 1 – The Awakening is heavier, darker, and bigger sounding than before. They wanted real, raw emotions to shine through with intensity, because what good is listening to music if you can’t “feel” it? They incorporated elements of pop, hard rock, and metal into these tracks, experimenting with the extreme limits of each of their instruments and voices. The Centauri Conspiracies: Part 1 – The Awakening is the 6 song EP to preview what is to come with the release of the full album. Like Triangulum Mechanism, it is a concept album. This time, instead of focusing on going through life’s tough moments on a personal level, they switched to a wider view: the world. The world has never been as interconnected, and although it seems that we have the access and ability to stay informed of what’s going on around us, we can never truly be sure of large-scale motives and intentions. Unfortunately, we live in interesting times, and that’s usually not a good thing. The band hopes to raise awareness of the different kinds of distractions that we humans face in the world today. However, instead of condemning mankind into oblivion, the band wants people to use their passions to constructively inspire them to keep the peace between each other. Despite all the acts of hatred in the world, there is still hope for humanity… and we need to hold on to that hope with everything we got.Sunshine & Bullets have started working on Part 2 of The Centauri Conspiracies